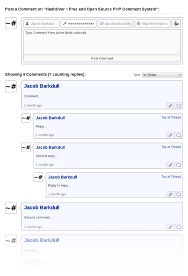 HashOver is a PHP comment system intended as a replacement for services like Disqus, IntenseDebate, Livefyre, and Facebook Comments. HashOver adds a comment section to any website by placing a few simple lines of JavaScript or PHP to the source code of any webpage. HashOver is a self-hosted system and allows completely anonymous comments to be posted, the only required information is the comment itself. HashOver is free and open source software under the GNU Affero General Public License.

There are a decent number of comment systems available today, few are free and open source, fewer are standalone systems not integrated with a content management system, even fewer are self-hosted, and even fewer allow anonymity.

Many third-party comment systems like Disqus, IntenseDebate, Livefyre, Facebook Comments and Google+ Comments, suffer from these problems and impose them and many restrictions onto their users, meaning you and your website's visitors. HashOver doesn't do this. HashOver is free and open source, and completely customizable, meaning you can make it do whatever you want it to, and it only does what you need it to.

How it works (the basics):

HashOver is self-hosted, as users post comments, individual XML files are created in a subdirectory named after the page URL under a specified directory in the hashover/scripts/settings.php file.

There are two methods of using HashOver, both methods require doing the following first:

The following actions are required before using HashOver.

Once the files have successfully been downloaded, extracted, proper permissions set, and setup, all you need to do is copy the code to one of the two following implementation methods and paste it into your webpage(s):

You may set the "count_link" query to display only a comment count linking to a specified page's comments. For example, the following code will display "9 Comments (11 counting replies)".

Give an HTML element the ID attribute "cmtcount" <span id="cmtcount"></span> for example, and that element will display a comment count. This is useful in creating comment "widgets" / "buttons" that display the comment count and link to the comment section. The following code displays a link similar to the previous code:

To change how the comments look, use a Cascading Style Sheet (CSS.) HashOver comes with a default style sheet named "comments.css" under the "hashover" directory.

Using the JavaScript method this style sheet is automatically placed in the page when the comments are displayed. This is not true for the PHP method. However, in both methods it is recommended that the following <link> element be placed in the <head> element of your website's webpage(s):

Alternatively, the following may be placed at the top of an existing style sheet:

Need more control over how the comments look?

Editing the file hashover/html-templates/default.html allows you to move around the HTML elements of each comment, meaning you may change where each commenter's avatar icon and name appears, as well as where the date/permalinks, "Reply", "Edit", "Like" and "Top of Thread" links appear.

However, rather than editing the hashover/html-templates/default.html file, it is recommended you edit a copy of that file, and then merely change the $template variable in the hashover/scripts/settings.php file. This way your changes won't be lost when you upgrade HashOver, and you will have a working fallback just in case.

The hyperlink tag <a> is not allowed in comments, instead users can post URLs as-is and they will become links. This is done to help protect users against scams and SPAM, since links can't say something different than where they actually link to, thereby preventing phishing, for example.

Use a canonical URL:

A canonical URL uses the canonical link element in the <head> section of a webpage to prevent the creation of multiple separate comment directories for multiple page URLs that present the same content. For example, http://example.com/page.html and http://example.com/page.html?parameter=1 will have separate comment threads because the URLs are different, even if both URLs return the same content.

The following JavaScript will automatically use the URL in the canonical link element:

In PHP adding a $canon_url variable before the include function will trigger the canonical URL behavior:

If you need more fine tuned control over URL parsing, particularly what URL queries should be ignored, add unwanted URL queries, one per line, to a file named "ignore_queries.txt" under the "hashover" directory.

Adding a query name without a value will remove the query from comment directory names no matter what its value is. Adding a query name with a value (name=value) will only remove that specific query with that specific value from comment directory names. For example, add "lang" to the "ignore_queries.txt" file and the URLs http://example.com/page.html?lang=en and http://example.com/page.html?lang=jp will be treated as being the same page and thus display the same comment thread.

Need to block an IP address?

If the $ip_addrs variable in the hashover/scripts/settings.php file is set to "yes", user IP addresses will be stored in their respective comment file(s). Those IP addresses can be used to block spamming, abusive, and/or obstructive users from posting and interacting with the comments all together. Simply add them, one per line, to a file named "blocklist.txt" in the "hashover" directory.

Please consider donating to support the continued development of my software. You can help ensure there is always a central place to download my software and read the latest news & updates.